We will be collecting for Pillows for Troops; $10.00 provides a pillow for a troop member overseas.

We will also be filling out Christmas Cards for Troops- Cards and sample messages will be provided.

Our Guest Speaker is Karen Vaughn, Author of World Changer and frequent FOX news guest. She is a Gold Star Mother and has a compelling story of her son Aaron a US Navy Seal. Karen will be speaking about her book in the context of rebuilding a warrior culture in America -sacrifice, strength, and determination.

There will be a book signing at the end of the meeting.

Karen Vaughn is the mother of fallen US Navy SEAL, Aaron Carson Vaughn (SEAL Team VI). On August 6, 2011 Aaron was killed in action in the Tangi River

Valley of Afghanistan when a chopper (call sign Extortion 17) carrying thirty Americans was shot from the sky while rushing into battle. Losing Aaron changed everything….and put Karen on a new path.

Over the past six years, Karen has emerged on the national scene as a powerful spokeswoman for not only our defenders still fighting on foreign soil and securing peace across the globe, but also as an advocate for a better, stronger, more resilient America. In recent months, she’s dedicated herself to helping parents build strong, formidable, goal-oriented families.

Carrying on Aaron’s legacy has brought this Gold Star mother through the halls of Congress, into a National Press Conference, onto dozens of national television sets and over two hundred local and national radio programs. She’s been featured on large stages across this country as a keynote speaker, including a guest speaker position during opening night of the 2016 Republican National Convention. Through her endeavors, Karen has gained audience with three of our nation’s presidents.

Karen has been married to Billy Vaughn for thirty-seven years and still believes her greatest accomplishment on earth was raising her three children, Aaron, Tara, and Ana. 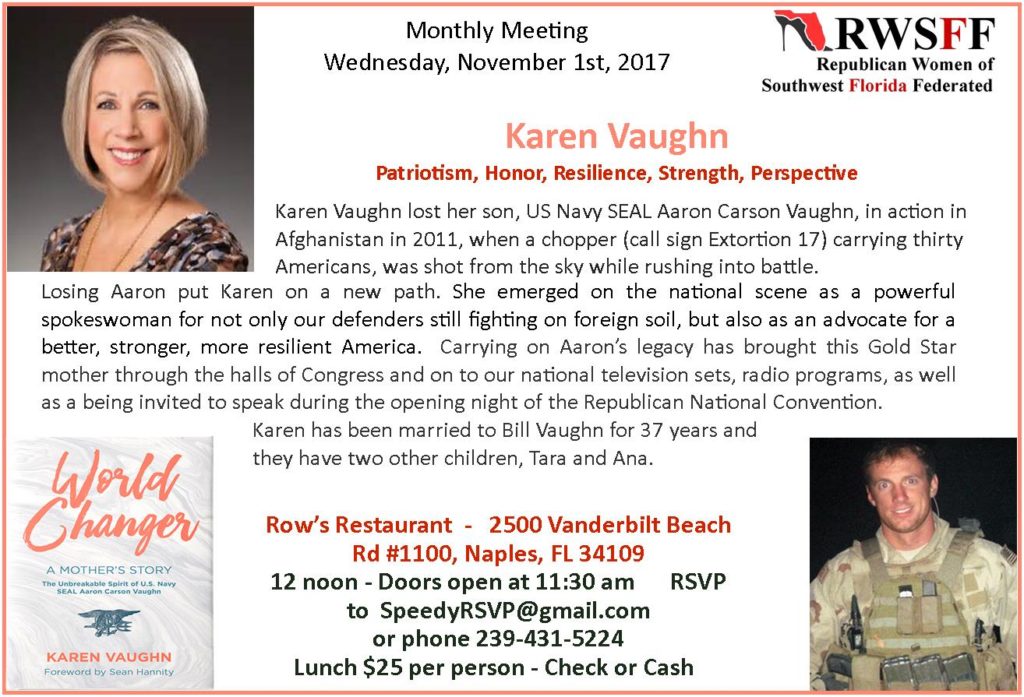